St Peters GAA Club has been an active sporting, social and cultural organisation at the heart of our community since its establishment in 1902. We seek to contribute to & support the enrichment of our members, their families and the broader community through the provision of best in class facilities and an inclusive and safe sporting environment to support our children achieve their full potential by developing their physical, emotional and social wellbeing.

At St Peters, our vision is that everybody in our community has the opportunity to be welcomed to take part in our games and culture, to participate fully, to grow and develop and to be inspired to keep a lifelong engagement with our Association.

With over 1200 members, the Club currently caters for over 700 playing members across 60 teams in our football (ladies & men’s), hurling and camogie codes.  The Clubs underage section alone (up to under 18) currently facilitates the participation of over 600 children from our community in our games. 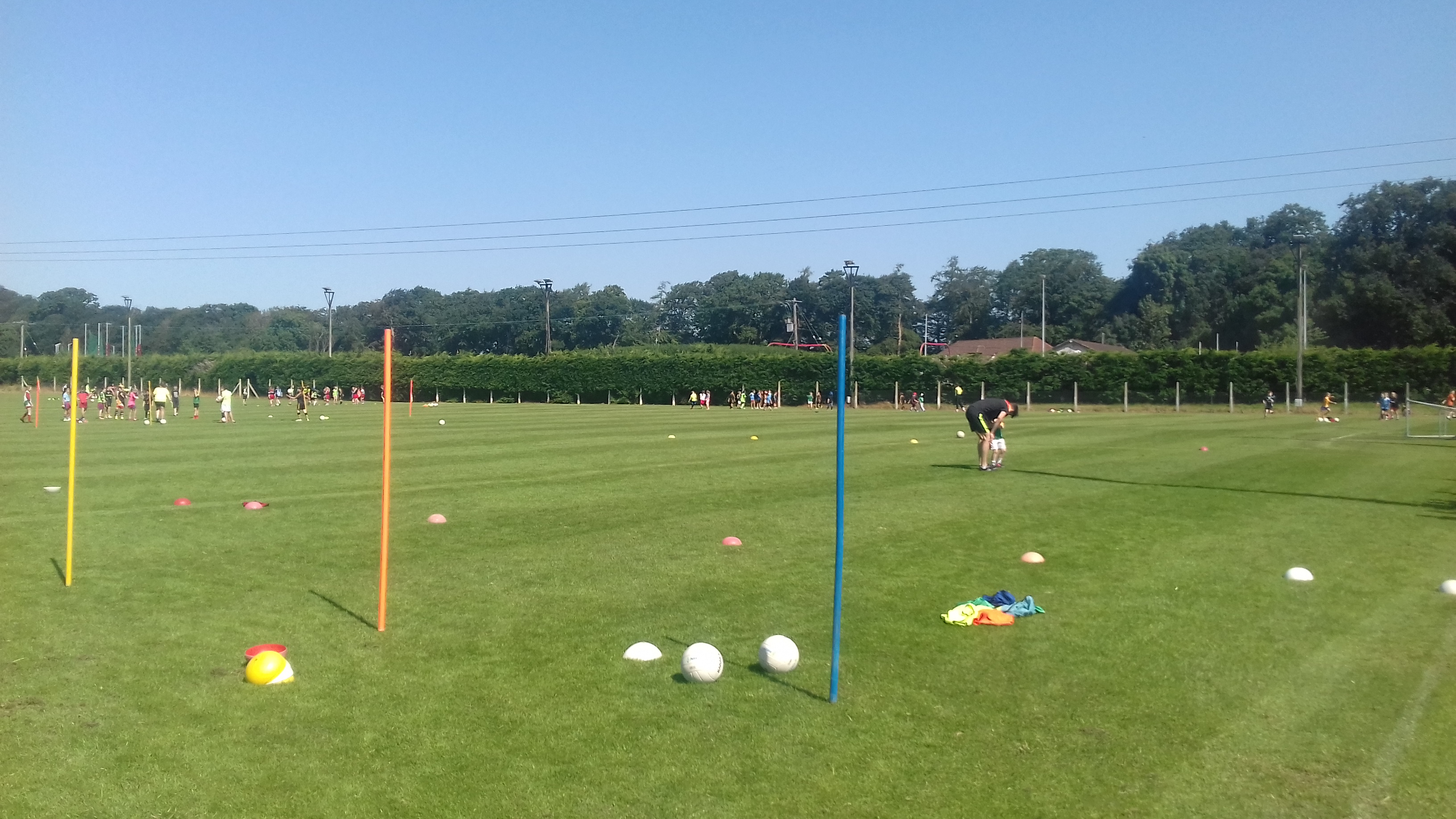 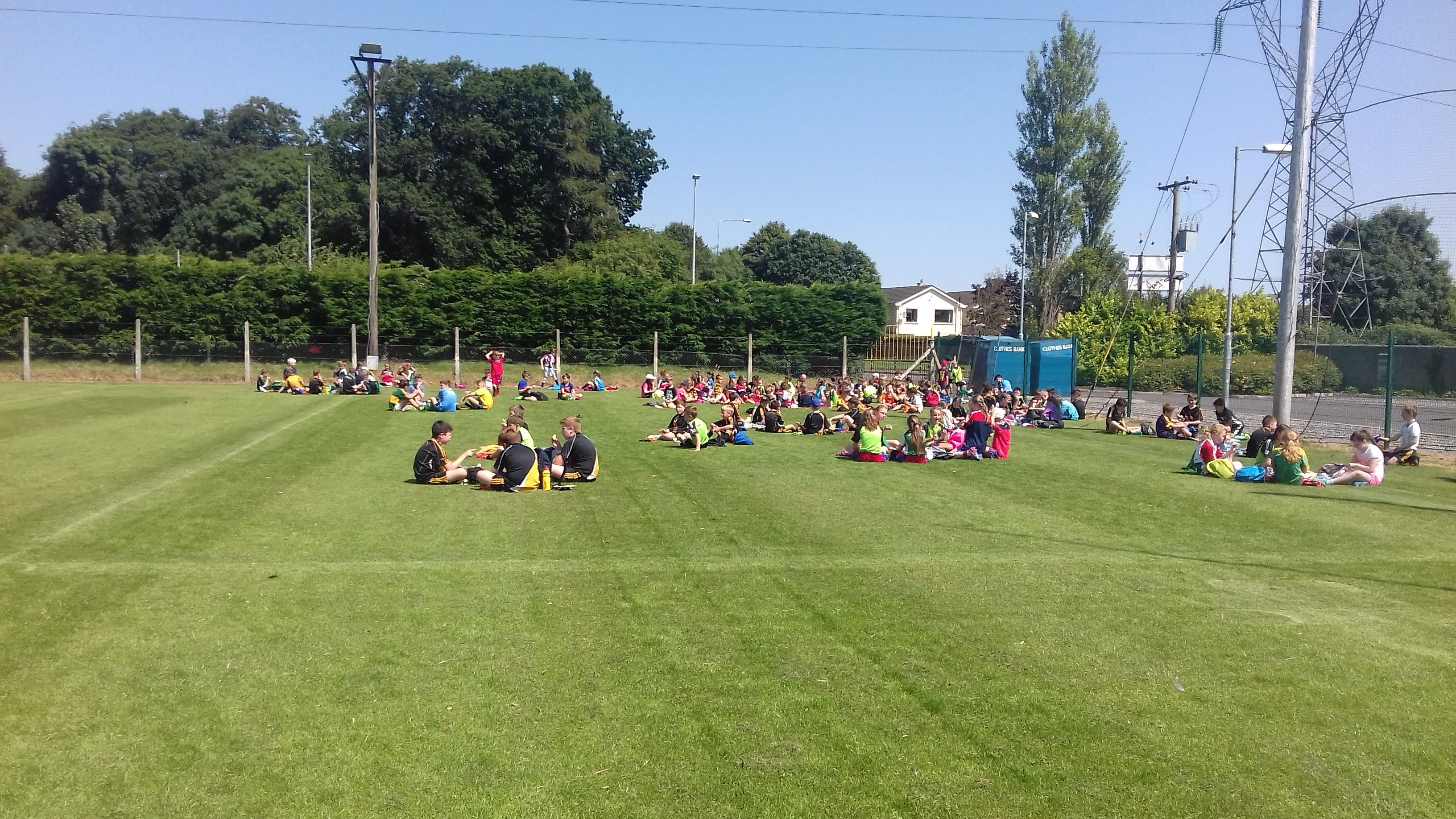 We want to help our young players to be as good as they can be, to facilitate, nurture and encourage talent.  To help our players fulfil their athletic potential. We aim to ensure that we provide an outlet for everyone from the community who wants to play our games, to develop a team environment and to foster a sense of duty to the people around us. We will achieve excellence in coaching standards and in providing games for our young players in a safe and enjoyable environment.

Our Games Development Strategy has four areas of focus – 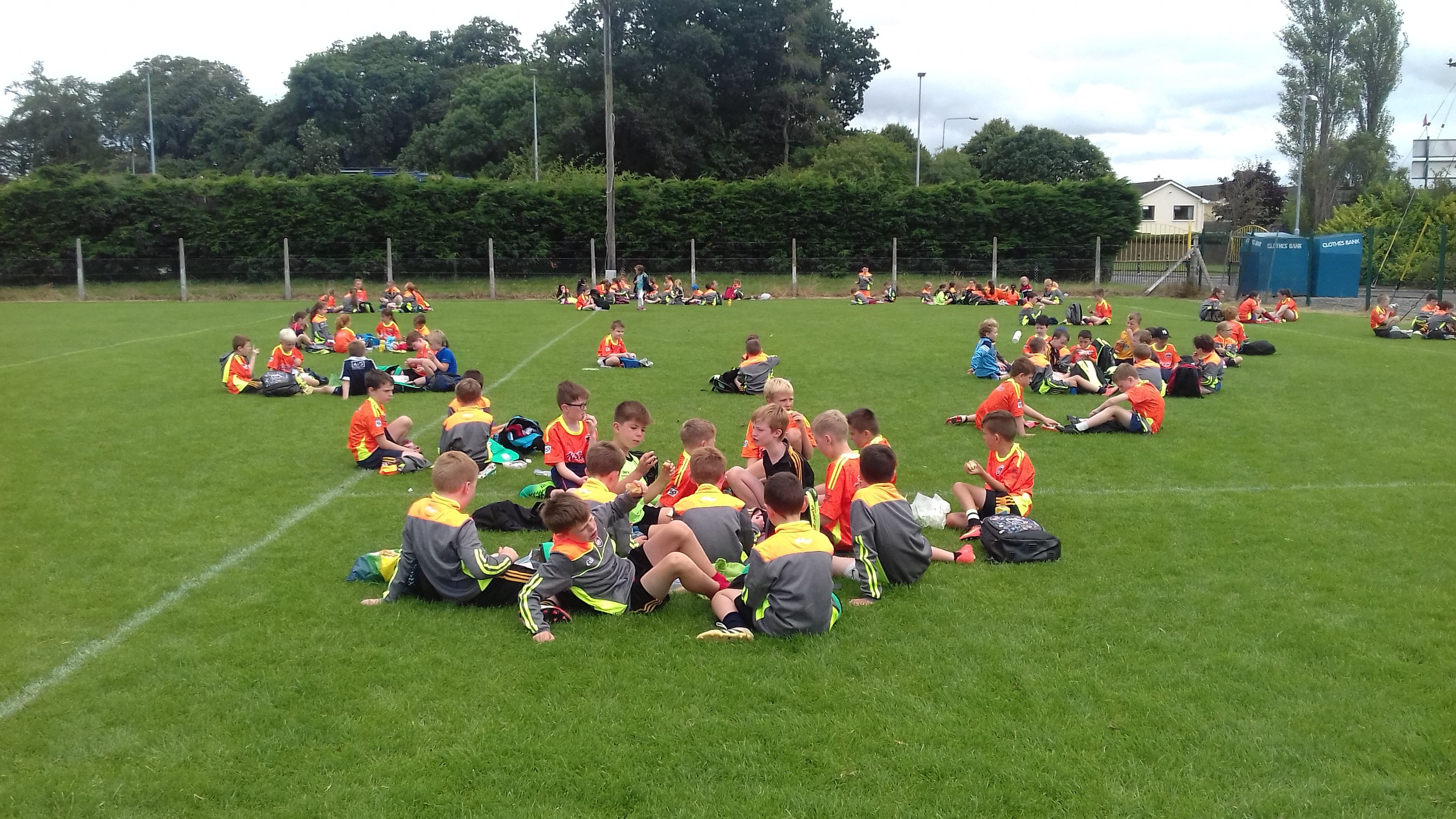 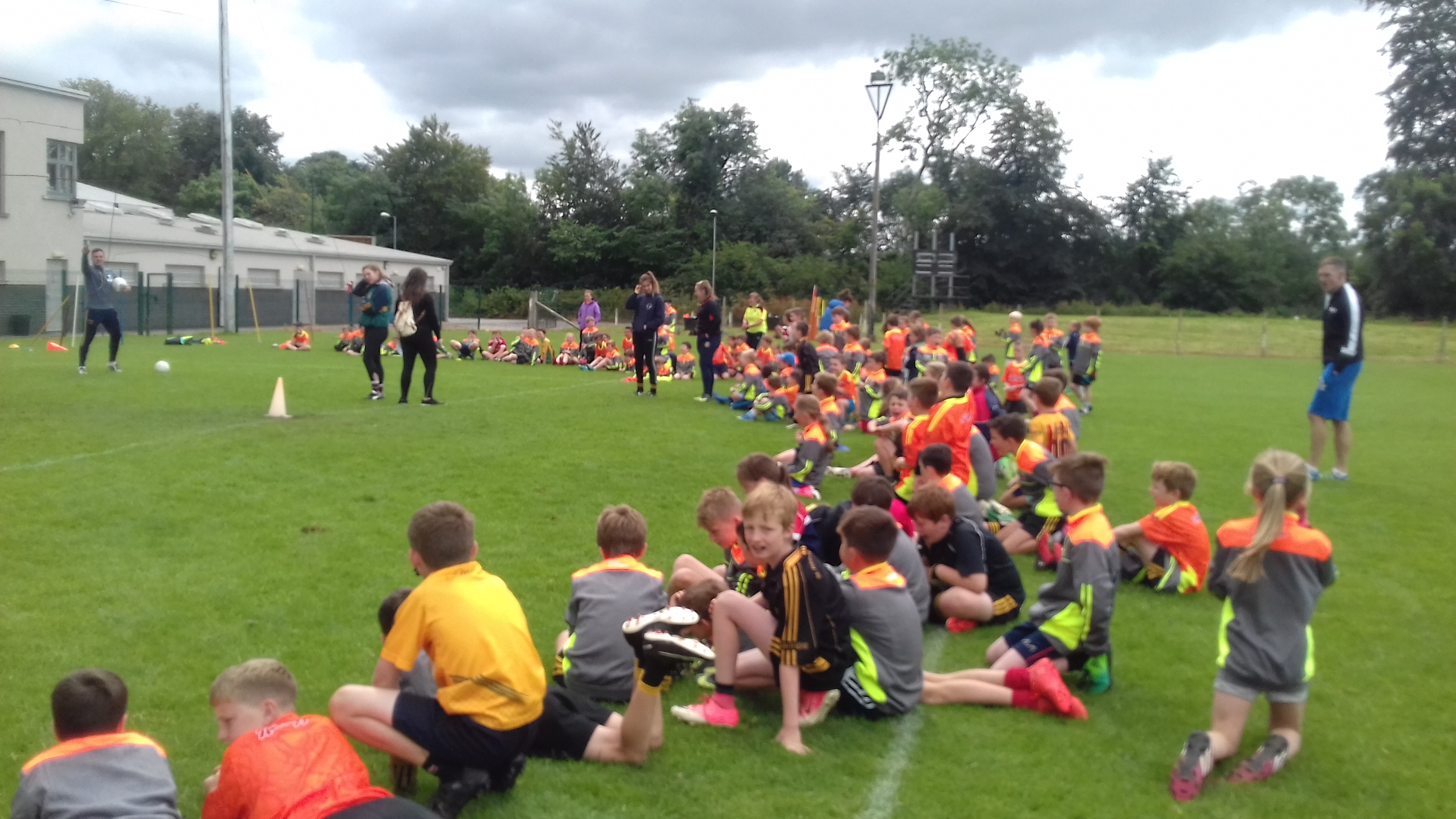 At the heart of the running of our Club is the broad involvement and active volunteerism of our members in all aspects of the Club from coaching, the management of our teams, the maintenance of our facilities, and fund raising to meet the ongoing expenditure associated with the operation  of the Club.

The strength of our Club relies on active involvement and we are always keen to increase participation across the Club, with a particular welcome for newer members.

If you are interested in getting more involved in any aspect of the Club, please do not hesitate to contact Fergus McNulty (087 237 6859), our Club Secretary, Gillian Reilly (086 812 1456) or any member of the Executive 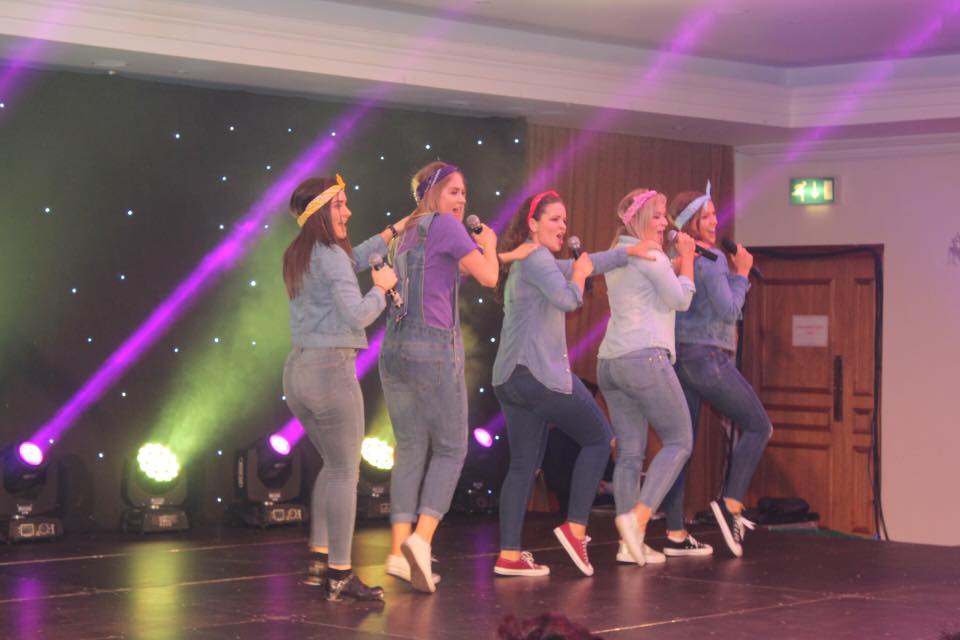 Established in 1902 by Bob O’Keefe, a Primary School Teacher living and teaching locally but originally from Mooncoin, Co. Kilkenny, the Hurling Section of Dunboyne GAA Club has been in existence for more than 100 years. It wasn’t until some 40 odd years later in the late 1940s that the game of Gaelic Football was properly organised within the Club. It was at this stage that the GAA Club in Dunboyne was re-formed under the guidance of Father Carberry, C.C. and in 1952 became known as St. Peter’s GAA Club, where today, both football and hurling (along with the Camogie Section) are thriving. 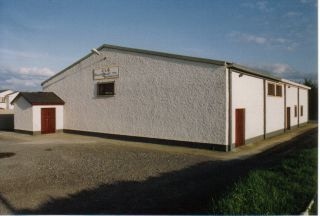 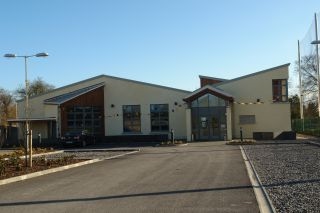 Initially located in Tom’s Field on the Navan Road and using an old Prefab for Changing Rooms, the Club moved to their site on the Rooske Road which was officially opened on May 16th 1993, a day that saw Meath take on Kildare in Rooske to celebrate the opening of the pitch.

Given the growing nature of Dunboyne and the ever increasing enthusiasm for GAA in the locality major development of these premises was required and 2007 saw the opening of the ‘New’ Clubhouse.

The first hurling team was established in Dunboyne by Bob O’Keeffe and the record books indicate that the locals took to the game immediately with Dunboyne recorded as the victors in the Meath County Championship in 1908, 1911, 1912, 1913 and 1914. The family names of the team from that era included Boylan, Kane, Maguire, Reilly and Moran – names that are still synonymous with the club a century later.

The success of the early years was not sustained however and 1914 is the last occasion that Dunboyne claimed the Senior County Championship. In recent years, the club has established itself as force in Meath hurling once more and fields 4 teams in Minor, U-21, Intermediate and Senior divisions. Although the ultimate prize of the Senior Championship has proved elusive, recent successful campaigns at U-16,Minor, indicate that we are heading in the right direction.

The club has had a number of representatives on County Panels in the last couple of years and 2016 being the most successful with Meath winning the Christy Ring Cup, U21B All Ireland and getting to the final of the Minor B All-Ireland Final.

Since its foundation, the St. Peter’s Gaelic Football Team has had its fair share of success. The first reference to football success in Dunboyne came on the 29th of June 1935. The Dunboyne Juvenile team won the first ever Meath County Championship by beating Nobber at Páirc Tailteann. The score was Dunboyne 3 – 5, Nobber 1 – 8. At that time the Juvenile Championship was played through the National Schools system. Tom Madden of Harlockstown is the last surviving member of the winning team and still remembers the day well and recalls Joe Gibney, Michael Brady, Dermot Smith, Vincent Milden and Arty Kavanagh who played with him.

The season of 1937 / 1938 brought further success when Dunboyne again won the Juvenile Championship. This team included names that were to become synonomous with G.A.A. games and activities in the Parish and in County Meath over the years. People like Johnny (Ringboard) Reilly, the brother of Jim and the uncle of Brendan, not forgetting Bert Watters whose nephews and nieces have served Dunboyne with distinction. Seán (the Long Fellow) McWilliams and Johnny (Lippy) McWilliams went on to play their part on Dunboyne teams, both Hurling and Football. 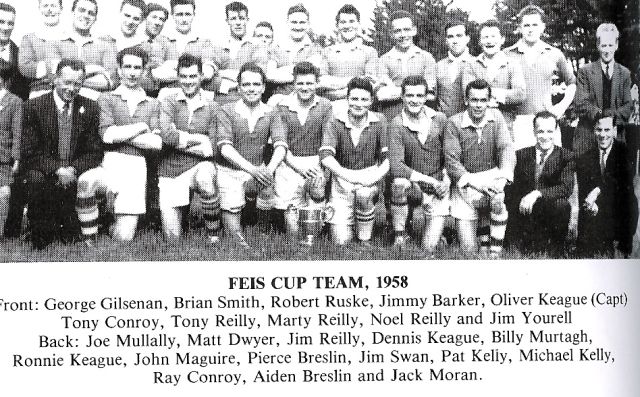 A dispute over club colours led to the setting up of TWO Camogie clubs within the Parish of Dunboyne, one in Clonee, playing in blue, while the Dunboyne girls played in red, opting against the blue because of its potential association with the ‘Blueshirt’ political movement at the time.

With the outbreak of the Second World War the Club disbanded due to a shortage of fuel for travelling to their matches and it was only in 1966 following a request from some girls in Dunboyne to local GAA members Oliver Brady and Pat Kelly, who in turn, approached Maura Flanagan about setting up a team, that the club was reformed.

Mondays and Wednesdays were designated as practice nights and everyone was surprised at the large numbers turning out for training. Advice and instructions were readily available by many of the then GAA members which included Sean Boylan (the subsequent successful trainer of the Meath Senior Football Side) and Paddy McIntyre (a player with Offaly, Dublin and Leinster teams). 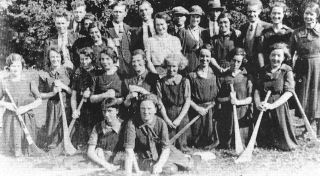 Although the team was founded in 1966, it wasn’t until 1970 that they showed their full potential and went on to win nine Senior titles in a row between 1970 and 1979.
During this time Dunboyne also entered underage teams and the most successful year for Camogie in Dunboyne would have to be 1972 during which Dunboyne won three titles.

In 1980, many of the Senior girls decided to call it a day as far as competitive play was concerned and Dunboyne began the process of rebuilding the team. In 1981, Dunboyne once again featured in the final but unfortunately on this occasion were beaten by Kilbride by a mere 1 point. The Senior Title again returned to Dunboyne in 1984 when they beat Enfield, and once more in 1985 when the team overcame Navan. 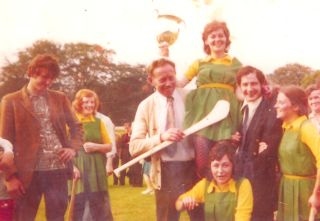 Unfortunately, since 1985, although Dunboyne continued to field teams at Senior level, success eluded them and in the early 1990s the girls again decided to disband due partly to the increase in enthusiasm for Ladies Gaelic Football in the Parish and also because of their own individual commitments; family, travel etc. However, with the introduction of a team in the U-12’s Championship in 2004, the club was revived yet again. The girls were back!

In 2005, the U-10s brought home the Elizabeth McDermott Perpetual Cup, beating Ratoath in the Final in Trim. The Junior Team were also successful, beating Donaghmore Ashbourne in the Final.
The following year, 2006, saw the U-10s triumph again, this time beating Kilmessan convincingly in dreadful Winter conditions in Dunsany. At the same time, the adult team went on to win the Intermediate Championship, beating their nearest rivals Blackhall Gaels in the Final.

In 2007, the U-12s won their Championship beating Kilmessan in St. Martin’s, Drumree, whilst the U-14 girls won the Shield Trophy. The introduction of an U-21 competition saw the Dunboyners rise to the occasion, beating Kiltale in what can only be described as a thrilling final in Dunsany.
Currently, Dunboyne are competing at all levels in the County from U-8 through the ranks to Senior level, and are always keen to hear from new players who may move in to the area.

ABOUT US
Established in 1902 by Bob O’Keeffe, the hurling section of the club has been in existence for more than 100 years. It wasn’t until the late 1940s that the game of Gaelic Football was properly organised within the club and in 1952 it became known as St. Peter’s GAA Club. Today both football and hurling, along with the camogie and ladies football sections, are thriving.
© 2016-17 St. Peter's GAA Club, Dunboyne.
USEFUL LINKS